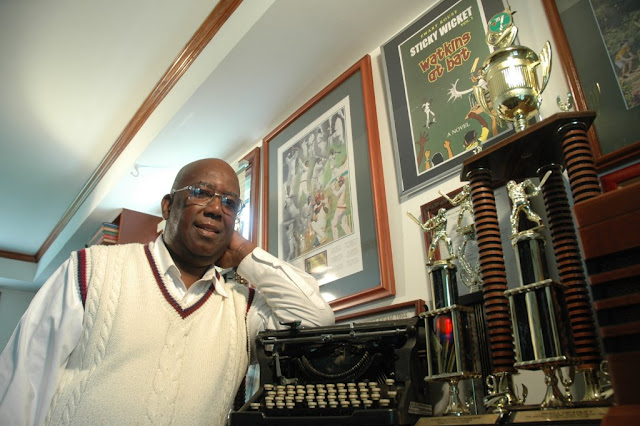 I love being a member of the South Jersey Writers’ Group. Our group provides opportunities and inspiration for all members to reach their goals. Everyone has a story to tell and if you check out our blog, you will learn how many of the members got started down that road to publication. Our group is blessed with many talented people and I was happy to have this chance to interview Ewart Rouse on his books and on his love of Cricket. 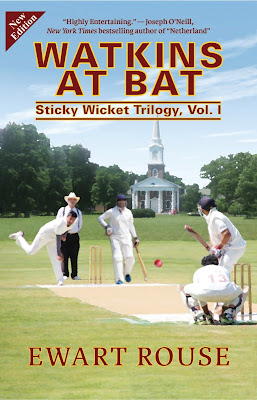 Ewart Rouse is the author of the Sticky Wicket Trilogy: Watkins at Bat, Sticky Wicket Trilogy Vol.1; Watkins Fights Back, Sticky Wicket Trilogy, Vol. ll; Watkins’ Finest Inning, Sticky Wicket Trilogy Vol. lll; Watkins’ Overseas Tour. All the books are about a game I don’t know that much about, but Ewart Rouse was graceful enough to explain.
Gilbert: Tell us a little bit about yourself and your days as a reporter in Trinidad and here in the states. Did you always want to be a reporter?
Ewart Rouse:  I grew up in Trinidad back when it was under British rule. Because there were few local authors at the time, we studied primarily British and American literature in school. I decided I wanted to be a reporter after it struck me that many of my favorite authors — including Dickens, Steinbeck, and Hemingway –— were journalists.
There are no journalism schools on the island. Fortunately, the Guardian, the major daily newspaper, ran a training program for would-be journalists who, if they cut mustard, were offered jobs. I applied and was accepted into the program. After three months of following the beat reporters around, attending formal classes that they taught in the newspaper’s library, and covering stories, I made the cut. I was given the court beat, and soon was covering politics, the top beat, at a time of great political upheaval with the island seeking its independence from Britain. 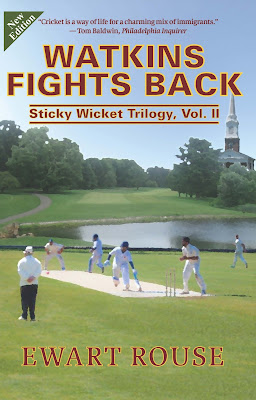 With that background, I landed a reporting job with the Associated Press in New York when I migrated to the United States in the 1970s. After brief stints in the wire service’s bureaus in Newark, Atlantic City and Washington (the Watergate scandal that led to Nixon’s resignation and Gerald Ford’s swearing in as President was brewing then), I joined the staff at the Philadelphia Inquirer. I worked at the Inky for three decades, primarily as a business writer, retiring as a suburban editor in the paper’s Cherry Hill bureau a few years ago. While at the Inquirer, I also taught newswriting as an adjunct journalism professor at Arcadia, Temple, Rutgers and Rowan Universities.
Gilbert: Ewart, your books are about cricket and the men who play this game. Would you explain the dynamics of the game and what attracted you to it? How long have you been playing? Can women play, too?
Ewart Rouse: First, a little history: my series of “Sticky Wicket” novels originally were published by LMH Publishing. I acquired the rights back to the books and now have republished them, with new covers and material, through CreateSpace. Each volume is part of the same story, but can stand on its own. 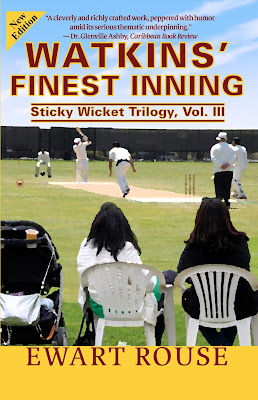 Now, they aren’t sports books, but rather novels about immigrants from countries where cricket is the national sport — India, Pakistan, the West Indies islands, England, etcetera — who yearn to play the game of their youth in their adopted land. It’s a humorous look at a supposedly “gentleman’s” game, a game considered the granddaddy of American baseball. I take an almost over-the-top approach to the challenges the men face, not least of which are wives who think it’s time the men grew up and spent more time with their families, as well as Little League and soccer moms who don’t take too kindly to these strangers in white uniforms, chattering in myriad languages and with funny accents, who have taken over their playgrounds — “hijacked,” as they tell it — to play a “foreign” game that nobody understands, a game that lasts the entire day, freezing out their kids.
As one angry Little League official demands of Watkins during a confrontational meeting, “You people are in America now. Why don’t you play an American sport?”
That quote tells you it’s a story about a clash of cultures, and that something’s gotta give.
What attracted me to the game? Because it is a national sport in Trinidad, it was natural for me to pick up a cricket bat when I was old enough to lift it, as natural as an American kid would swing a baseball bat at that age.
And yes, women do play the game, at all levels, including international tournaments. 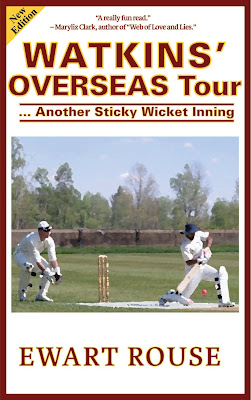 Gilbert: Is the character Watkins based on you, or someone you knew?
Ewart Rouse: That’s one of the first questions I’m usually asked. Watkins and the other characters are composites of people I know ­— men who are so obsessed with the game they are willing to jeopardize their marriages to play it, and women who have given their husbands an ultimatum: put down that cricket bat and attend religious services with me on weekends or the marriage is over.
It’s a scenario with which athletes and spouses in any sport, and readers of any genre, can identify.
Gilbert: Can you explain to the readers what exactly a “sticky wicket” is?
Ewart Rouse: As I explained on my website — www.ewartrouse.com — the expression is akin to “being in a pickle.” For example, try explaining to your boss what you were doing at the casino, where you were spotted, after you had called in sick from work.
In cricket parlance, a “sticky wicket” refers to the condition of the playing surface of the game — the 66-feet-long by 10-feet wide strip in the middle of the field. When it is adversely affected by moisture, the surface — called “the wicket” or “pitch” — is likely to cause the bounced ball to behave in an unpredictable manner. It might pop up, go right, go left, or creep like a rat toward the batsman.
Even the most talented of batsmen – the ones with the sharpest of eyes and quickest of reflexes – can be surprised by such a delivery, end up playing the wrong stroke, and getting out.
The novels’ “sticky wicket” titles refers to “the pickle” in which protagonist Freddie Watkins finds himself as he battles the wives and the establishment. 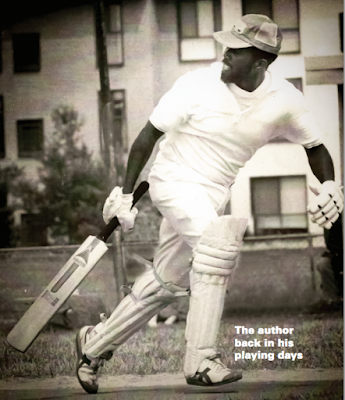 Gilbert: Do you feel that cricket is becoming more popular in the states as more people learn about the game and how it’s played?
Ewart Rouse Back in the mid-1980s, there were seven established clubs in the Philadelphia-South Jersey area. Today, with the influx of immigrants from cricketing countries, (New Jersey reportedly is among the most popular destination in the United States for immigrants from around the world), there are dozens of clubs in several leagues. Nationwide, there are now hundreds of clubs.
It has remained a largely immigrant sport, but there is a concerted effort by the United States Cricket Association to get Americans to take up the sport, just as they have soccer, once considered a “foreign” game. That effort includes getting schools to follow New York City’s example and make cricket part of the schools’ sports curriculums.
Gilbert: Can you tell us about the Lifetime Achievement Award that you received and the proclamation given to you by the Mayor of Camden.
Ewart Rouse:  The South Jersey Caribbean Cultural Organization holds an annual “heritage day” festival on the Camden waterfront, with lots of music and vendors selling ethnic foods and things Caribbean. The mayor of Camden issues proclamations recognizing the day and the recipients of various awards. In 2013, I was presented with a lifetime achievement award in recognition of my years as a journalist, teacher and my activism on behalf of the cricket community. It was quite an honor. 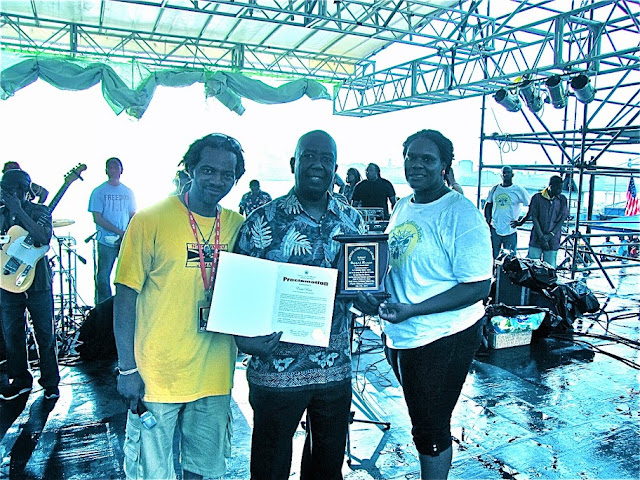 Gilbert: You have four books out in your Sticky Wicket Series. Can we expect a fifth one?
Ewart Rouse: Following the mantra “write what you know,” I’m going from the cricket field to the newsroom, from humor to thriller. My next protagonist is a crusading journalist who becomes the story after he loses his moral compass and becomes involved in a number of potentially career-ending, headline-grabbing incidents.
Gilbert: What advice would you give to young people who are curious about trying their hands playing cricket.
Ewart Rouse: There’s plenty of info on this website:  USA Cricket Association http://usaca.org/
Gilbert: What advice would you give to young people who are interested in becoming writers?
Ewart Rouse: Take notes about interesting quirky people, their idiosyncrasies, their pithy quotes and vignettes. They might recognize themselves in your stories and threaten to do bad things to you if portrayed in an unflattering light. When that happens, you have your sequel.
Also read anything you get your hands on, from books and newspapers (before they go the way of the dinosaur) to labels on paint. Each contains nuggets of information that the mind will retrieve for just the right spot in your next project. Embellish them, take them to the extreme and, who knows, maybe you end up with a bestseller. Some might call you a dreamer but, hey, as the saying goes, you can’t have a dream come through if you don’t have a dream.
Gilbert: Thank you, Ewart Rouse for this interview. Too those of you out there who are interested in learning more about the game of Cricket and the men and women who love the game, pick up the Sticky Wicket Books.

The books are now on Kindle check for them here, here, here and here
Posted by Marie Gilbert at 6:24 PM