Blogging, Coffee, and Growing As a Writer 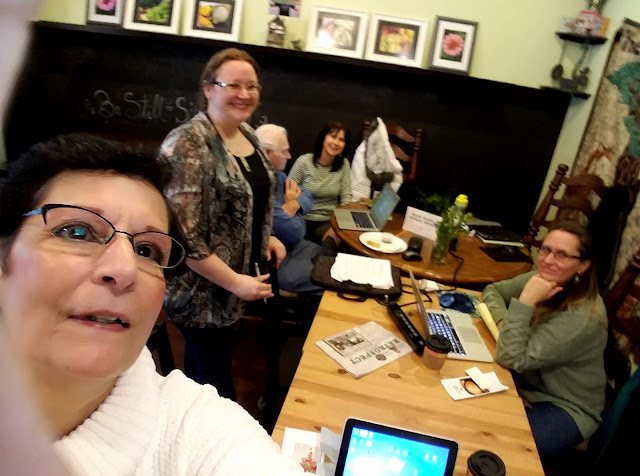 Although the hearts of all the members of the South Jersey Writers’ Group are still heavy over the loss of our Patron Saint of Blogging, Glenn Walker, we continue to meet. Blogfest is a monthly ritual that is held the third Sunday of every month at Treehouse Coffee Shop in Audubon, NJ. Why are we so loyal to working on our blogs? Find out after the jump
Read more »
Posted by Marie Gilbert at 4:07 PM 3 comments: 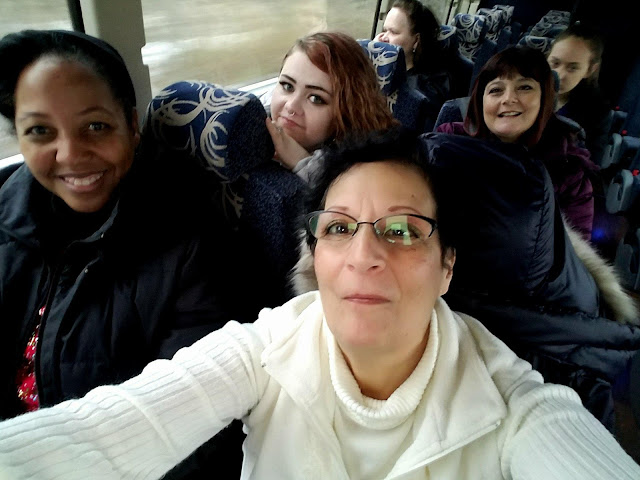 I don’t get to spend enough time in New York City, but that will change this spring when I plan to spend a whole weekend sightseeing with my daughter, granddaughter and travel buddy, Tracy. This December 15th, the four of us had traveled by Starr Tours Bus to see the famed Radio City Rockettes. Were the Rockettes as awesome as promised? Meet me after the jump to find out


The Trip
Tracy and I had become good friends during my first trip to Italy where I signed up for the Leisurely Tuscany Tour. Tracy had mentioned that she’d always wanted to see the Rockettes and to think of her if I decided to go. After my grandson who’d finished his five year service with Marines and his wife, Kimberlea, moved back to New Jersey, I had the perfect reason to travel to New York. We booked our trip with Starr so we knew that everything for this adventure was taken care of. 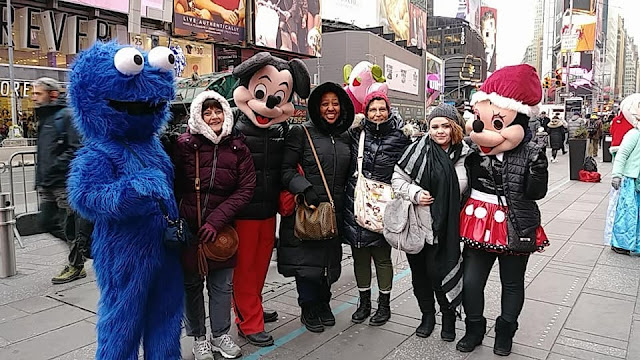 As soon as we reached the city, the bus driver handed out maps and a list of restaurants to visit before the show began. On our way to find Planet Hollywood, we came across some Disney Characters who offered to take photos with us. Stupid us thought that they were provided by the city, but after taking a few photos of us with Kimberlea’s cell phone, they began to ask for tips. My daughter gave the main spokesperson five dollars, but they wanted more. Our South Philly attitude is no match for New York con games...and the characters backed off. 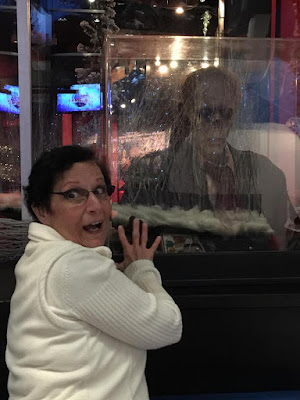 The sights and sounds of the busy Times Square area were truly exhilarating. I freaking loved the hustle and bustle of shoppers and workers as they made their way to their destinations. At Planet Hollywood, we had fun checking out all the memorabilia while we waited for our food. I would definitely return to this restaurant for the ambiance and the tasty food.
The Rockettes
I can’t say enough great things about the show. The staff and security made sure the lines getting into the theatre were organized and moving steadily. The dancers were fabulous, especially performing one of my favorite routines with the wooden soldiers. There was even 3D segment at the beginning of the show. If you haven’t treated yourself to this event, please do so. 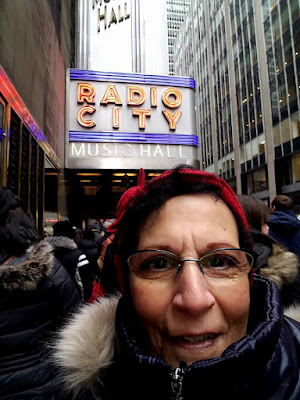 When we left the theatre we were faced with a full-fledged snowstorm. Luckily we were able to warm up with some hot chocolate at Starbucks. Our bus ride home was longer than expected due to the nasty weather and unbelievable traffic. I will never complain about Philly traffic again.
Conclusion
I’m a big kid at heart and I love to escape the stress from this past year’s election. Traveling to the Big Apple with family and friend, and our seeing Times Square up close and personal was a real treat as was the Radio City Rockettes. 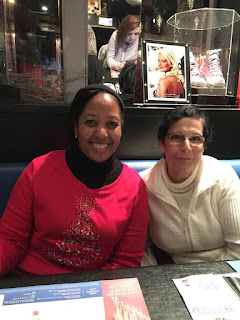 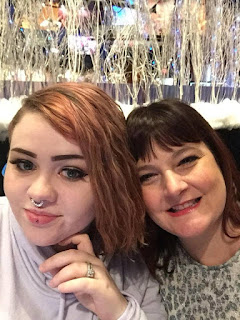 There is one final note on those Disney photo hounds. They are everywhere and, it’s up to you to say no, then quickly run away.

Posted by Marie Gilbert at 10:31 AM No comments:

Gilbert Speaks on "The Patron Saint of Blogging" 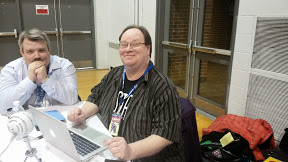 This past Wednesday on December 6th we lost a literary knight in shining armor. Sir Glenn, a nickname that was lovingly given to Glenn Walker, was a mentor to the members of the South Jersey Writers’ Group, and a friend to anyone who strived to be the best blogger out there in social media land.
I am still trying to come to terms with his death. I’m not alone. Glenn touched everyone and anyone who wanted to write. He is sorely missed by his friends at SJWG, and his fellow bloggers at the Canadian Pop Culture site: Biff Bam Pop!
Andy Burns, who is the Editor-In-Chief of Biff Bam Pop, wrote a beautiful tribute to Glenn and you can read it here. Glenn Walker was involved in so many projects: Welcome to Hell; Biff Bam Pop; The Gar Podcast; The Make Mine Magic Podcast; but his love was all about pop culture. He was a library of information on almost every comic book out there, and although he loved to review movies and television series, his blog “French Fry Diary” was a big hit with many who considered themselves true connoisseurs of fast foods. Glenn’s short story “Live to Write” is featured in the anthology of speculative fiction, Strange World. 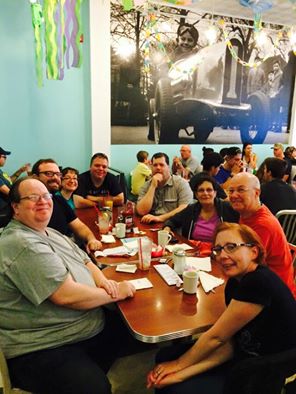 Glenn and I first met after I had retired from the Academy of Natural Sciences. My granddaughter, Katrina, was already a member and it was she who introduced me to the members of the South Jersey Writers’ Group and to Glenn. Glenn was responsible for me becoming one of the writers for Biff Bam Pop.
My fondest memories of Glenn were when I began writing the reviews for “The Walking Dead” on BBP. I was a retired grandmother of nine, who was not only tech challenged, but naïve with the mechanics of blogging. Glenn would wait until the early morning hours for me to post my review. As Andy’s second-in-command, Glenn was responsible for editing the post before it could go live. 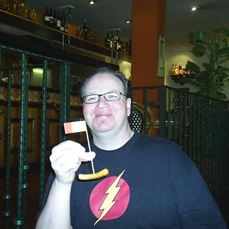 Glenn never lost his patience even after explaining the purpose of tagging multiple times. It became a running joke after a while, but he never gave up on me. I was always eager to get Glenn’s input whenever I wrote a review for Biff Bam Pop even if we often had a different point of view on a specific episode.
Before moving to Florida with his lovely bride, Jennifer, Glenn would hold court at a local coffee shop once a month. He gave freely of his time and experience to anyone who needed help with their blogging. It wasn’t long before we grateful bloggers began calling him “Sir Glenn the Patron Saint of Blogging.” 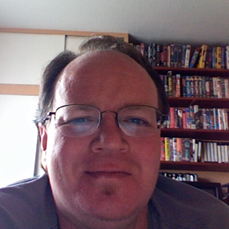 I miss my friend very much, but maybe if the universe is kind, Sir Glenn will find himself in some heavenly coffee shop. Maybe they will serve French fries and milkshakes in that angelic coffee shop. Maybe my friend will be surrounded by other writers and bloggers. I miss you, kiddo.


R.I.P Glenn Walker
Posted by Marie Gilbert at 11:38 AM No comments:

Gilbert Speaks on "The GOD Particle" 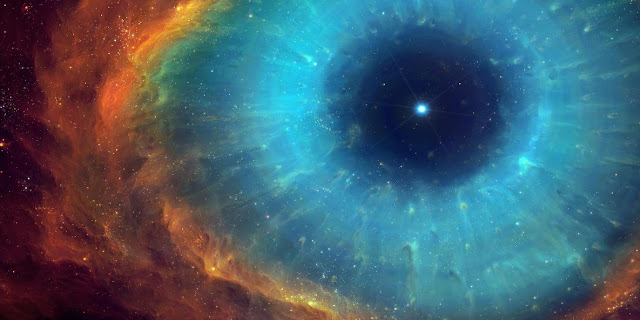 Although I was raised a Catholic, I have turned against most organized religions. I truly love GOD. Not only do I love our Creator, I’m always trying to lead people back to him both with my writing and psychic readings. Recently I was thinking about a book I read called The Selfish Gene by Richard Dawkins. How does a book about evolution tie in with the science behind the “God Particle and Saint John’s bible verse 1:1? Meet me after the jump to find out.
Read more »
Posted by Marie Gilbert at 2:38 PM No comments: