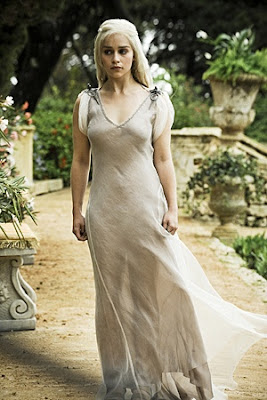 I’m hooked on the HBO series, “Game of Thrones.” I love the opening music and special effects as I watch each kingdom’s inner clockwork gears raise their towers and battlements. The show is based on the book, A Song of Ice and Fire by George R. R. Martin and lucky for us we are now on season three. All the characters in the show have the usual epic background history, but the one character that really keeps me interested and coming back every week, and every season is Daenerys Targaryen. 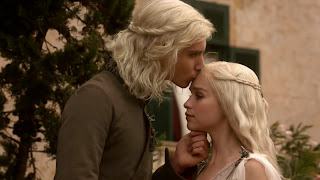 
Emilia Clarke does an outstanding job playing the character of Daenerys Targaryen. In season one, we watch as a young Daenerys suffers not only her brother’s cruelties towards her, but a forced marriage to Drogo a Dothraki khai. Deanery’s father, King Aerys, was killed towards the closing days of Robert’s Rebellion. Her mother, Queen Rhaelia died giving birth to her during a violent storm, earning the infant girl the nickname, Stormborn. She and her brother, Viserys were forced to live on the streets after their protector, Sir William Darry, died. This girl in season one, behaved shy and obedient to the men who claimed to have her best interests at hand. I foolishly thought that she would remain a victim, boy was I mistaken, big time! 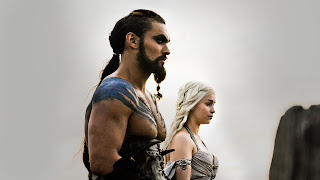 Watch out for the quiet ones


Daenerys marriage to Drogo proved to be the best thing that happened to her. She comes out of her shell and stand up to her brutal, greedy brother. 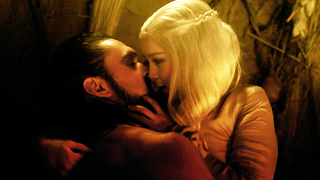 Her happiness grows when she learns that she is pregnant and all is well for Drogo and Daenerys, except for her brother’s impatience to wear a golden crown upon his head, which led Drogo to execute one of the best “Beware of what you wish for” scenes, ever! 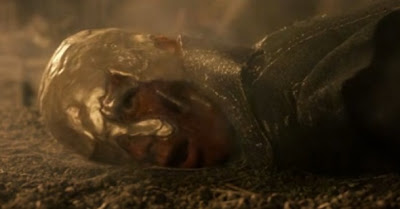 When Drogo is injured gathering an army to fight the Seven Kingdoms, Daenerys has a witch perform a blood ceremony to save Drogo. When the ceremony not only causes Daenerys to lose her child, but leaves Drogo an invalid, she acts decisively and bravely and smothers the husband she loves with all her heart, but in doing this, there is nothing keeping the Dothraki from killing her. 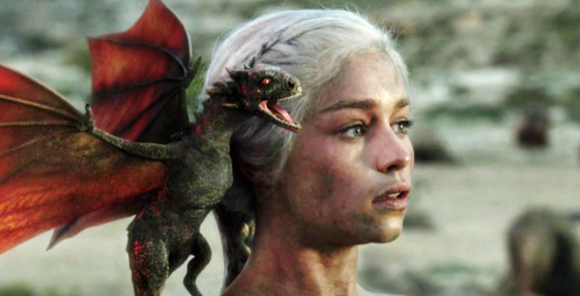 How does she react? Does she hide and whimper in the corner? Not this girl! She builds a giant funeral pyre to burn the body of her husband and that of the living witch. Then to everyone’s surprise she enters the center of the burning pyre with the three dragon eggs. Later, when Ser Jorah and the Dothraki see her emerge from the fire unharmed and holding three baby dragons, Daenerys proves to everyone that she is a kickass, super heroine, princess. Daenerys now has the loyalty of her people.


Keep your hands off my babies


In Season two, Daenerys steps up the game, constantly reminding Ser Jorah that she is not a child but a queen. When Daenerys and the starving Dothraki reach the city of Qarth after almost dying in the desert, they are refused entrance. 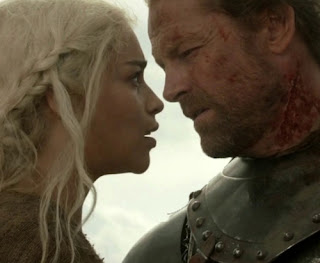 Daenerys threatens to have the dragons burn the city to the ground if they are not admitted. No one takes her seriously; she is nothing but a young girl with nothing but her young dragons to call her own. That is where everyone makes a mistake, what they think is weak, is stronger than steel. 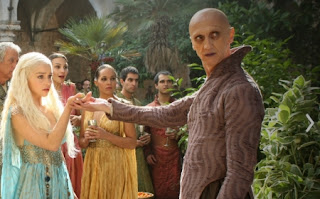 Daenerys is one smart cookie and even when she is held captive along with her young dragons in the House of the Undying by the warlock Pyat Pree, she keeps her calm. With one command to her dragons, the warlock is burnt to a crisp. 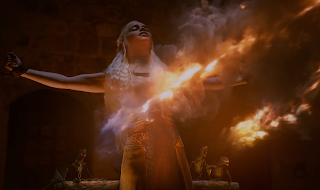 She and her dragons free, Daenerys now has the money to buy a small ship.


Hit them with your best shot


In season thee, the search for an army brings Daenerys and Ser Jorah to the town of Astapor. This town survives on the broken backs of slaves. She and Ser Jorah Mormont (Iain Glen meet with the master of the Unsullied. The master is cruel and obnoxious. 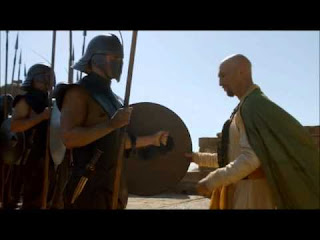 The training of the Unsullied is brutal, horrid, and heartbreaking, with only one in four making it to adulthood. The Unsullied are captured as babies, castrated, and by the time they are young men, forced to obey all their master’s commands. To prove their obedience, they must kill all the babies of the female slaves. 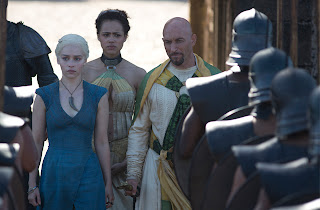 When the slave girl, who is translating for the creep master, tells Daenerys about the babies, you can see the smoke rise from her ears. She is pissed off. Plus she isn’t aware that the slave master is calling her vile names. Or so we think!!


This guy is a pig and has the Unsullied stand for days without food or water and even cuts off the nipple of one of the men to prove their obedience. He needs to die!!


Daenerys not only understands everything the creep master is saying but she has her own revenge in mind. After making a deal to trade one dragon for 8,000 Unsullied, Ser Jorah and Robert Baratheons (he saved Daenerys life and swore to protect her) give her some “man” advice. “You’re making a mistake, dumb girl. Don’t give away your dragon,” they say, or something along that line. 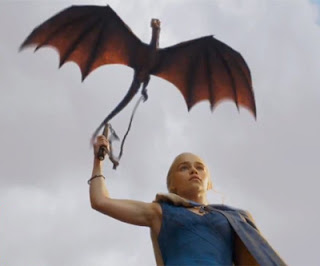 To which she replies in somewhat this manner, “Bug off. Don’t tell me what to do.” 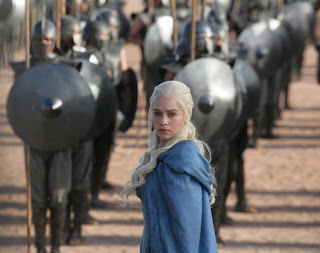 
This is no little girl to be bullied, or counseled by men who think they have her best interests in mind. She is a true leader and with her dragons at her side, and her 8,000 loyal soldiers marching towards the Iron Throne, nothing will stop her. 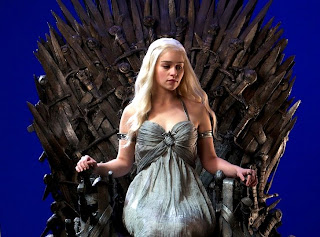 Posted by Marie Gilbert at 6:46 PM