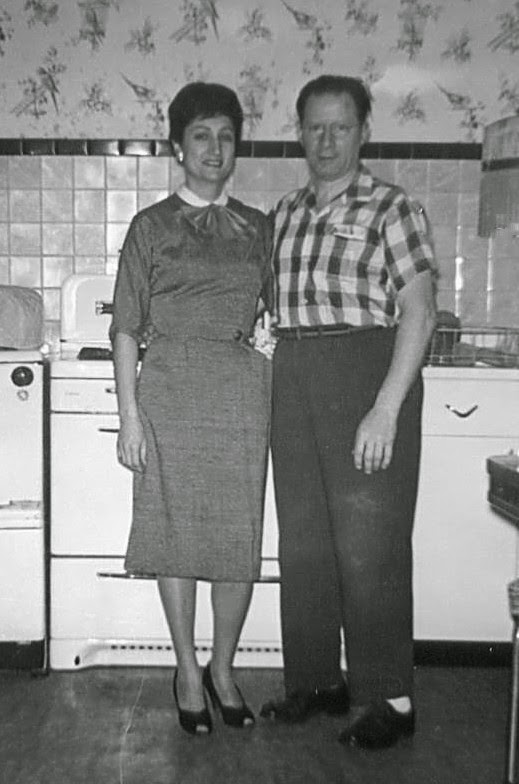 This isn’t the normal Fred and Lucy stories that I usually tell to people when I’m remembering my parents, but in a way, it’s quite relevant. My father, always the planner, always the practical one when his OCD wasn’t in overdrive, was a stickler for preparing for the future. It didn’t matter what the topic was; he was prepared. 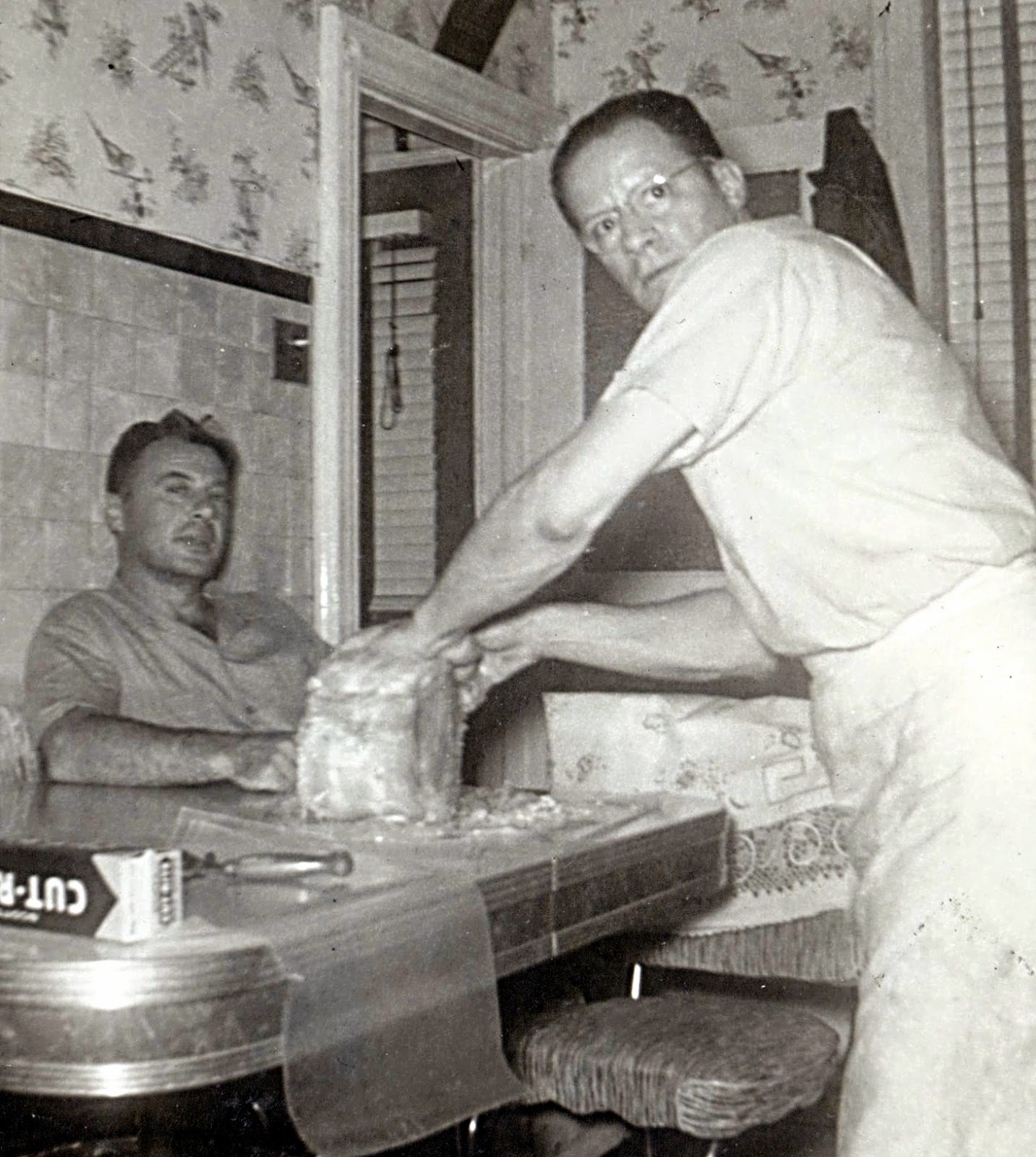 In case of world chaos, he had enough food, water and emergency supplies squirreled away to make any Zombie Squad Member proud. Fred used this ‘better prepared than dead’ mindset even in how and where he wished to be buried. He and Mary (our loving stepmother and wife #3) had gone shopping for their ‘last home’ and picked a  lovely spot at the Saints Peter and Paul Cemetery in Marple Township, Delaware County, Pa. 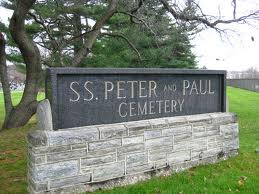 This was not just a grave to Mary and Fred and, cemeteries meant more than just death. I remember the many occasions that my father and stepmother asked me to drive them to their future graves. They wanted to “check it out,” and make sure the neighborhood (the section they were to be buried in) was still populated by nice people and not losers. I usually had a few grandkids with me, so we packed a lunch and threw a few folding chairs into the trunk. We ate, then me and the grandkids would roam the area and look at the tombstones, or father would spend the time telling my grandkids funny stories about his younger days. Finally, we'd pack up and head home. These trips were always fun, but visiting the dead wasn’t new to me. 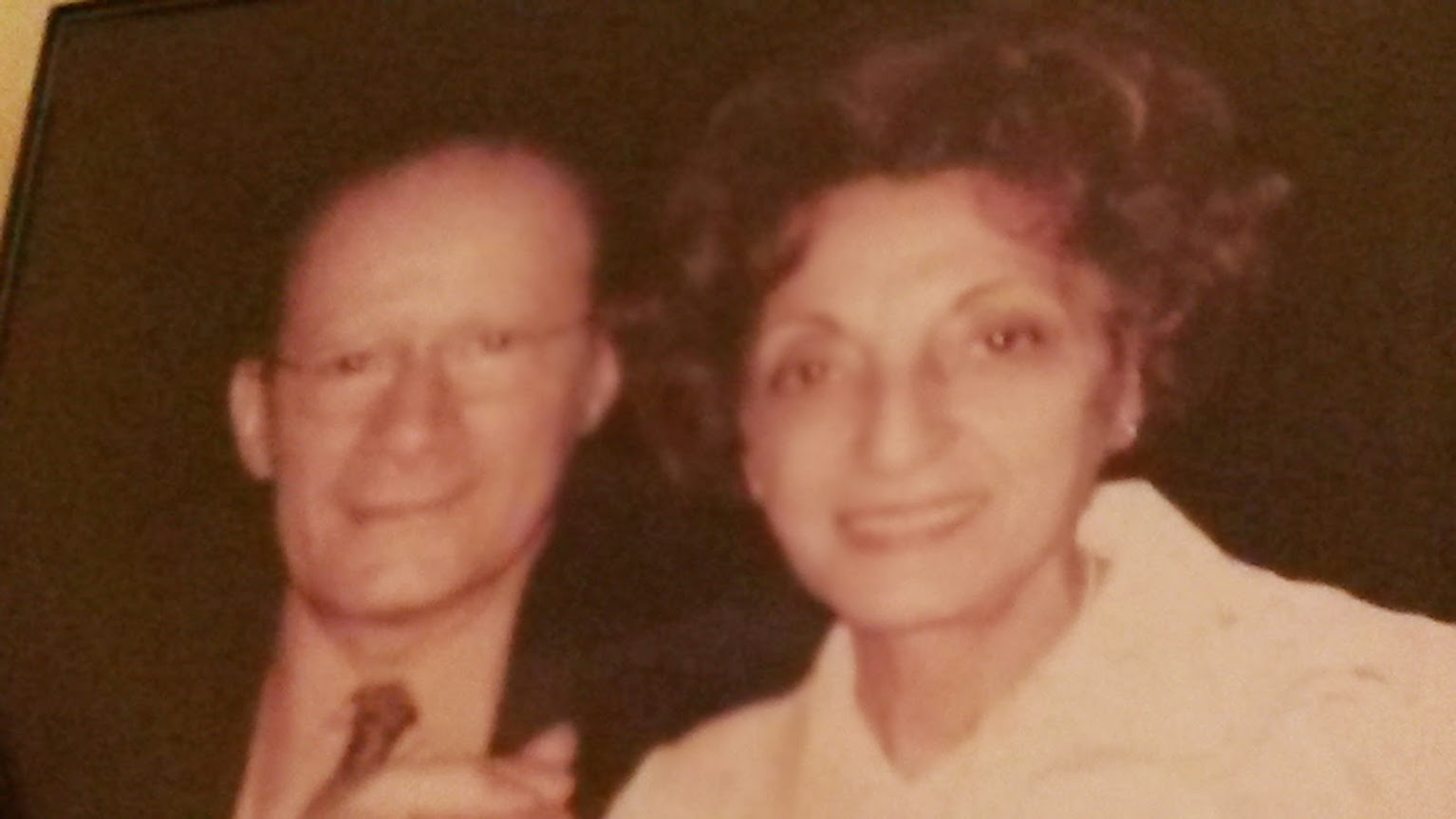 I don’t know if this is an Italian thing brought over by my parents, but I remember growing up with Fred and Lucy packing us four rowdy children into the car to visit dead family members at the Holy Cross Cemetery in southwest Philly. The aunts and uncles would join us there. While the adults chatted over lunch, my siblings , cousins and I would check out the mausoleums or the huge ornate tombstones. The ghosts that I saw, always seemed happy for the company and didn’t mind that we kids would accidently walk upon their graves. Yes, I saw dead people. I'm an Empath. It runs in the family.
Fast forward to the present when my father died. Grave bought, coffin chosen, inheritance divided equally among the four children, my father left little work for the survivors to worry about. A year later, when one of my husband’s sisters (single) had become seriously ill, the decision was made for us to chip in and buy two plots with each plot holding two coffins. The plan was that Dan and I would be Diane’s roommates so to speak. 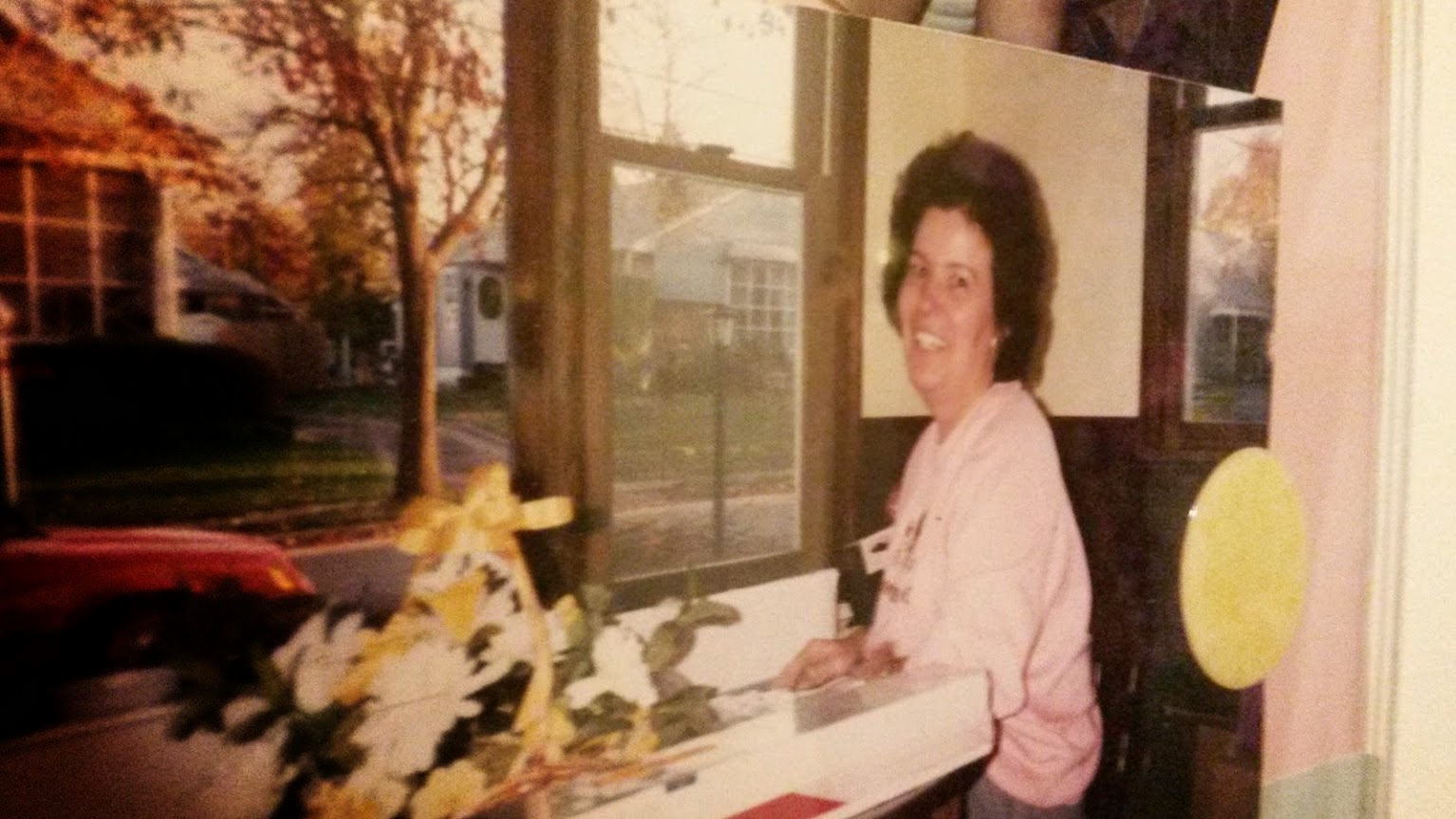 The extra grave would be saved for an emergency. Rent a grave?  The three of us decided on a secluded spot at St. Mary’s Cemetery. We selected an area in front of a big tree with wooded area nearby. Perfect! When Diane passed away, she was placed in a grave that she had chosen.

My mother, Lucy, who was living on the west coast with her second husband never planned for the bid “D”. She was afraid of dying and afraid of being buried in the ground, alive. I couldn’t bury my mother with Tom, my stepfather, because he’d been cremated and his ashes had gone to his daughter. When Mom died, I took her ashes home to New Jersey and placed them in the new niches that St. Mary’s Cemetery now has available. Mom would be in the same cemetery and we would be neighbors. Everything was set in place, or so we thought. Mom in upper right corner. Dan and I next row down 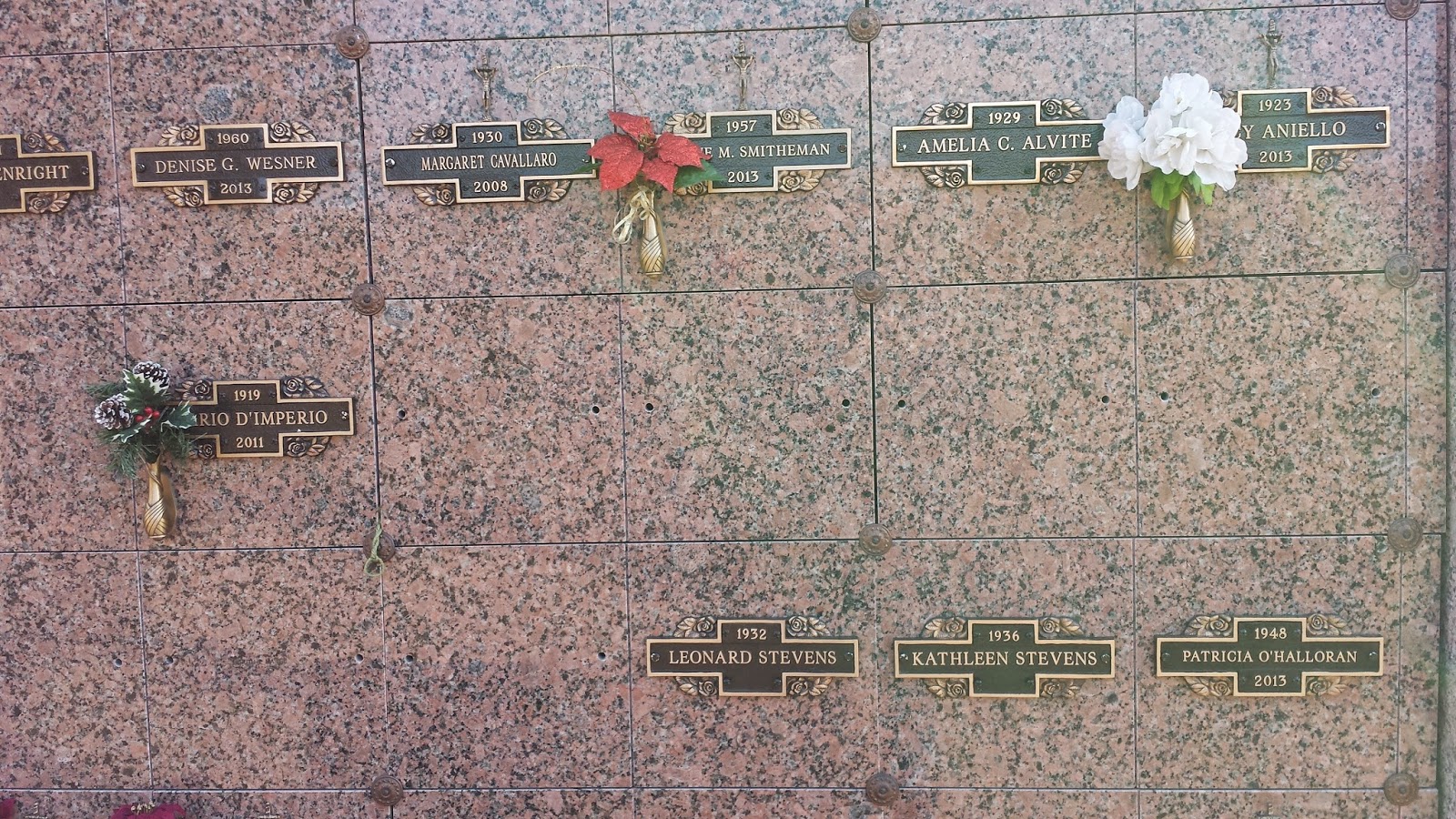 Over time, my husband and I began to like the idea of cremation and small niches a whole lot better than graves, so after talking about it, we sold our plot and bought two niches. We are now located in the row under my mom, Lucy Aniello. We would still be neighbors to Diane, but we would be a little bit further down the trail.  It turned out that it was a good thing we moved. I can't say the same for my sister-in-law, Diane.
Construction To add more ramps and make interstates 295 and 42 N/S freeways wider, the State has taken a large swatch of land away from the cemetery and included the land into the plans for major construction. Do you remember the wooded area and big tree that we liked when we first bought the plots? Gone!  Diane now has 42N/S Freeway as a neighbor and, we can’t afford to move her.  There is also a historic home in close vicinity to Diane that was used as an underground railroad during the Civil War. It is slated to be torn down for the larger highway. Shame.
Dan looking at construction 10 ft. from grave 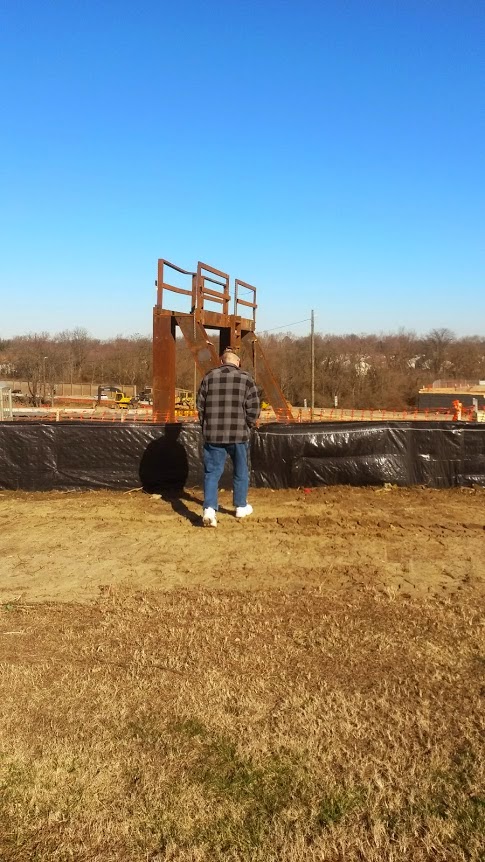 So, Dan and I are set for the inevitable and  like our new digs, or will, when we're dead.  I've mentioned to my sister Lucy and her husband that there are two niches left on the wall and, they are right next to Dan and I. She's considering the prospect of becoming our neighbors after death. I found out that my Uncle Mario and Aunt Rose will be residing at St. Mary’s when they pass away, too. It will be one hell of a big party at this cemetery with all us crazy ghosts hanging out.  I asked my daughter if she wants to purchase two niches for the future, but she’s young and thinks we’re all crazy.
Update
I found out that we can get ceramic photos placed on our niches. That is so awesome and I know what picture I want on mine. What do you think? Too much? 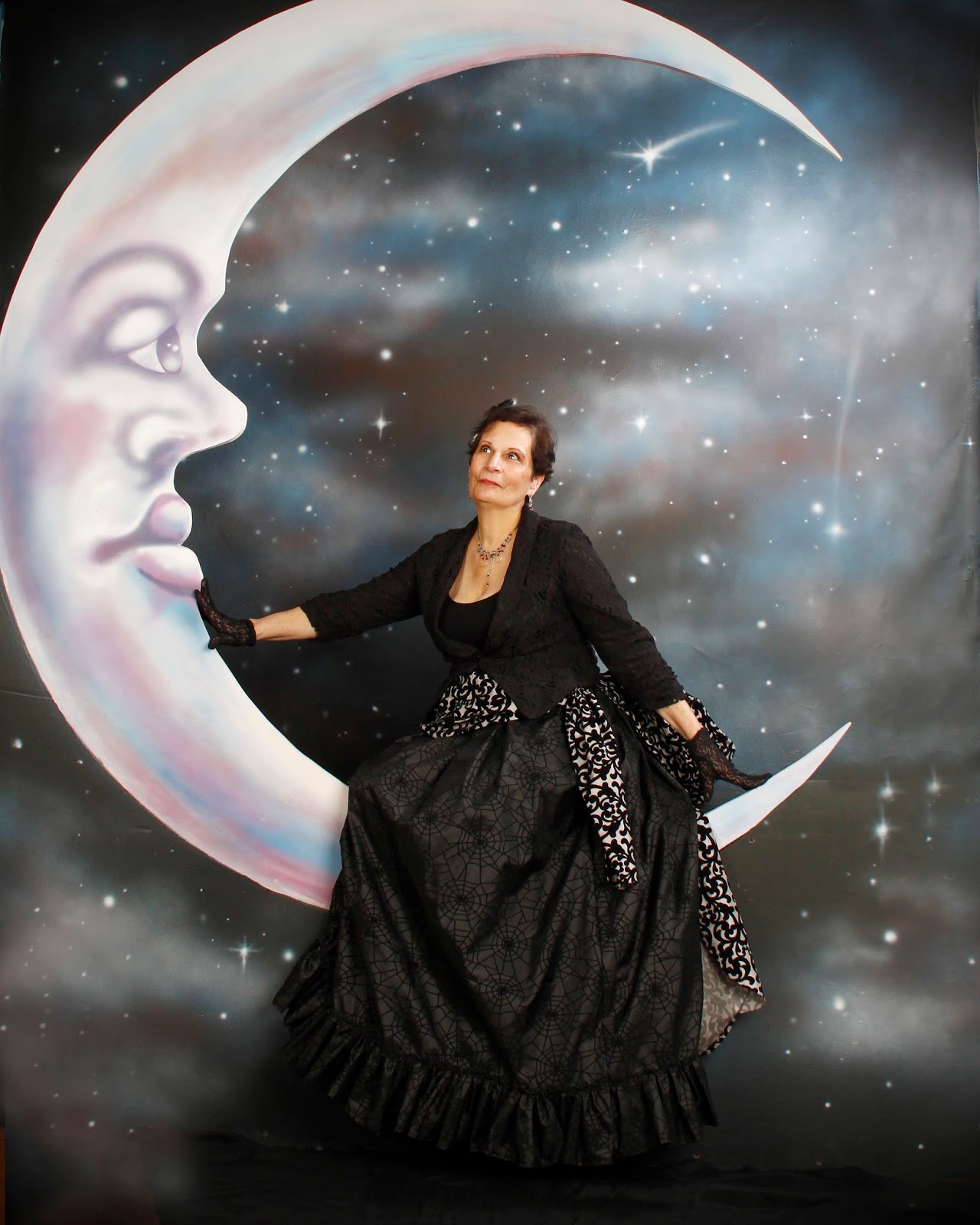 Nah!!! I'm going with it! Dan, on the other hand, wants the picture of him in his dress uniform from the Philadelphia Fire Department on his niche.
Posted by Marie Gilbert at 8:00 AM

Email ThisBlogThis!Share to TwitterShare to FacebookShare to Pinterest
Labels: cemeteries, death, family, graves, growing up is South Philly, Life with Fred and Lucy