I saved the best for last on my interview with the very talented Patrick Devaney. Enjoy


Marie Gilbert: “When is the last season of the Zombie Hunters? I want people to know who read my blog.”


Patrick Devaney: “For the last season, the eleventh episode will come out in the summer and then the final one (Episode 12) will be filmed starting January 31, 2015, and probably will come out in January or February 2016 and, as always, it will be on public access all over the country. If people e-mail me or come they come to a show and they see us there, we have DVDs of all the different work that we do, all of it on DVD and any public appearance that we do, anyone can come to talk to us and get whatever they’d like to see.” 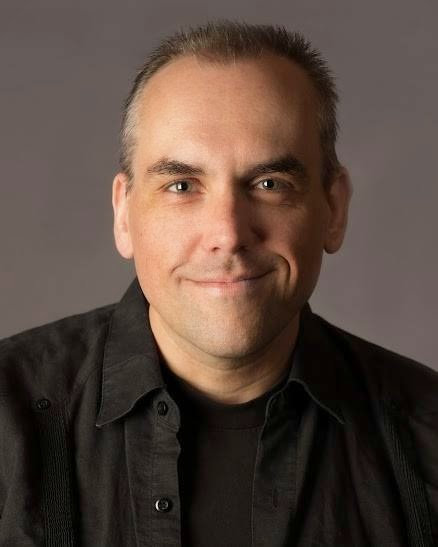 Marie Gilbert: “You’ll be at the film festival in New York this year?”


Patrick Devaney: “The New York Horror Show? Yes I’ll be there on Sunday only because we’ll be filming the other two days of the event.”


Marie Gilbert: “What are you showing at this event?” 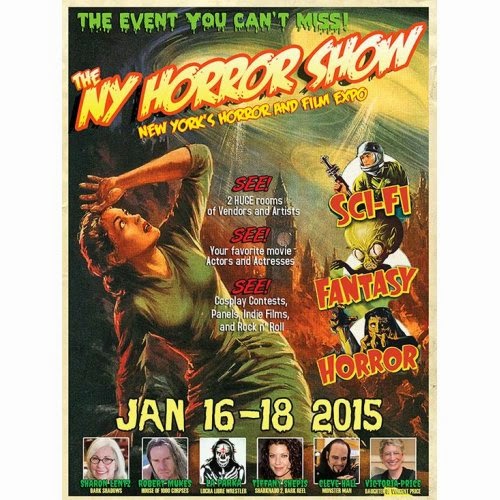 Patrick Devaney: “I actually won’t be this year because I’m swamped with production of so many things and, this year they’ve asked me to be one of the judges of the film festival which is an enormous honor and I immediately said yes. Adam Ginsberg and LC Macabre, they told me that they wanted me to do this and as soon as I agreed, they informed me that I had 124 films I needed to watch and I said, “Oh, I understand, okay...that’s a lot, but I’m in!” They gave me and the other judges access to them all. The films are some of, especially the short films, they are some of best that I’ve ever seen in my life.”


Marie Gilbert: “Well I’m a big supporter of Independent Films because you’re allowed more freedom and you get better quality because you’re not tied to a big Hollywood studio and you have more of a say on film.”


Patrick Devaney: “I’m happy to hear that, and I’m all for it as well because you don’t have to follow a formula. A lot of the films that I see that are so successful and so brilliant, but they would never get off the drawing board in Hollywood because they didn’t follow a specific marketing formula that they can match to make money. I understand that it’s a business and they have shareholders and they have to make money and that’s how the big gears turn, but on the artistic side, it lacks much. That’s why I love Independent Films, especially Independent Short-form work,, which is my favorite to watch and some of the ideas that I’ve seen in the past six weeks is just amazing work. It’s so nice to see so many people doing such wonderful things.” 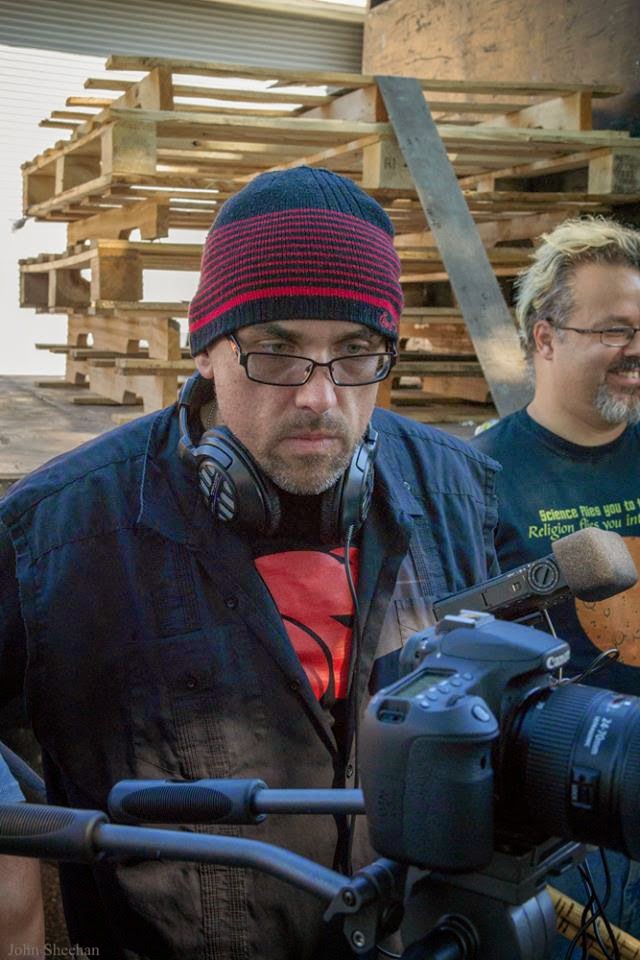 
Marie Gilbert: “One more question. You were in a band or you had your own band?”


Patrick Devaney: “Yes, and an interesting time with that. I was in a number of different bands on the New York circuit in the early to late 80’s. When Manny and Lindsay Serrano from Mass Grave Pictures told me they were looking to set Blood Slaughter Massacre in October of 1984, I was actually in a recording band at that exact point in time, and they asked me if I had any little demos to add to the film’s soundtrack. I not only had that but, the two guys that were in the band with me are both professional musicians today and one of them is in a very successful band that tours the world. I said to Manny and Lindsay “If I can schedule everyone together, they’ve actually agreed to re-record one of those songs for your movie.” So we got the band together twenty-eight years later and we re-recorded some of that music and it’s used it in the film. Blood Slaughter Massacre about to be released by Wild Eye Releasing this spring.


Also, you can talk to the crew from MGP too, if you want, because that movie is nutty and I’m even one of the characters in that too. I play Captain Bracken, the Chief of Police of the Town of Havenwood in the film.”


Marie Gilbert: “So when I see that movie, I’ll be listening to your music?”


Patrick Devaney: “There is a particularly gruesome death scene that you’ll be hearing our music during, yeah.”


Marie Gilbert: “Because of your busy schedule, do you have time to devote to your music?”


Patrick Devaney: “I really haven’t at all. I stopped performing over twenty years ago and just to get this one song together for their movie kind of re-sparked interest in it for me, but I kind of try to leave the work in the hands of the professionals. I know much better musicians than I am so I try to work with a lot of different people, like Charlie Maffia and Steve Montano, the two people I was speaking about earlier. The band we had was called ‘Romeo Penguin’, the band that did the work for Blood Slaughter Massacre.


I also work with a wonderful composer and arranger named Bernadette McCallion, who scores music for shows like The Shield and The Real World and many other major network shows, and she gives me the time to do my independent films as well, which is a godsend with her. 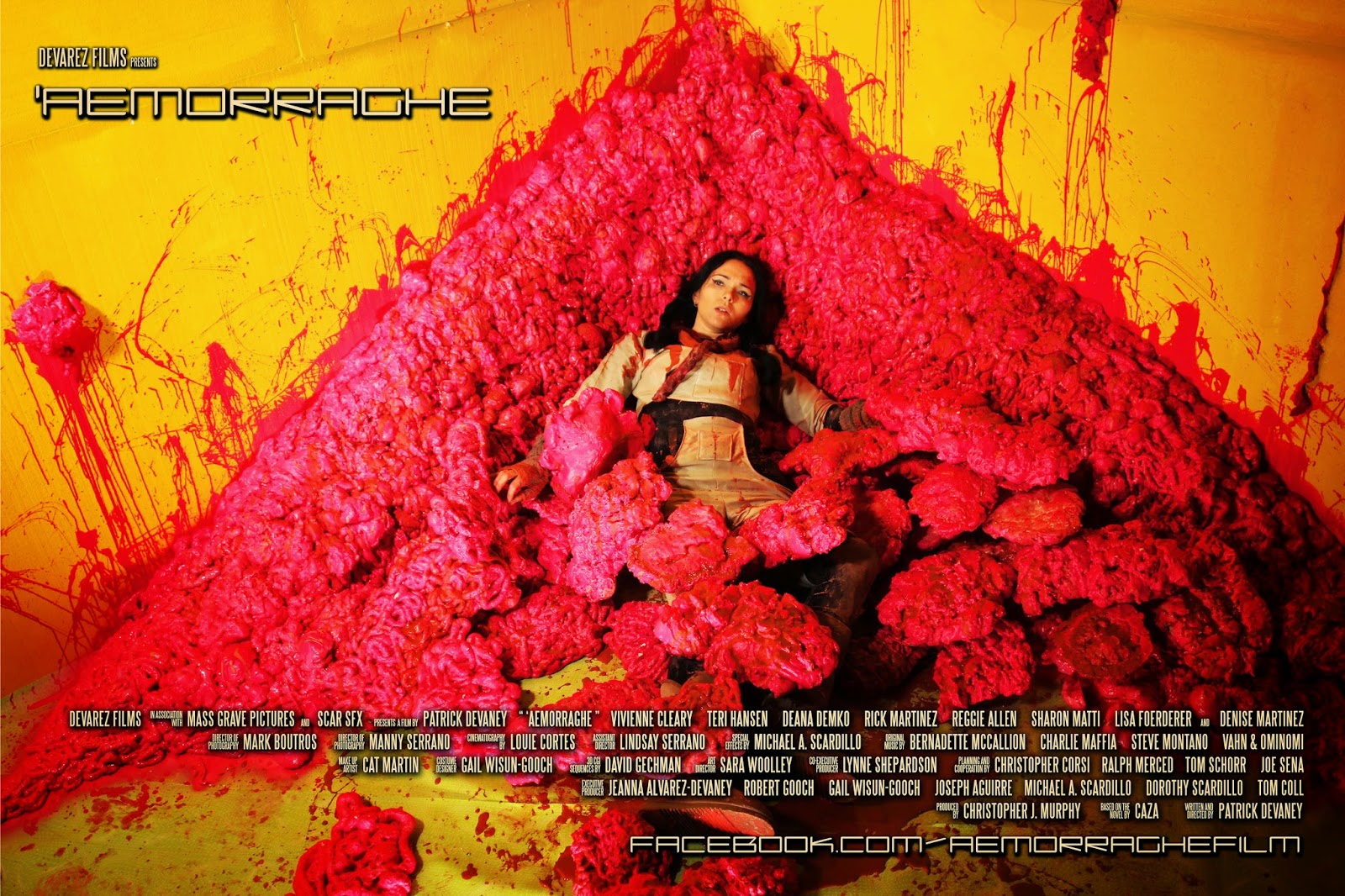 We’ve been friends for twenty-five years and she does this for a living and I get her hand-me-downs mostly, but with my film Aemorraghe, she actually did the score for it. It was all original music and, it’s amazing how everything tied in. She worked with Charlie and Steve from her studio as they worked in The Bastudio in Bayside, NY, on other original music as well as all the Foley. Bernadette also composed at home and then sent the themes over to them and then I would approve everything once they had it properly placed and mixed. Charlie also enlisted a beautiful track from a London-based producer named Vahn who recorded with a singer called Imonomi, and that was the icing on the cake for the soundtrack.  I could not have asked for a better sound team to work with, and that’s why I left it to them!


When you see the film, you’ll see how everything has come together for it. It’s one of the best-sounding Indie short films I’ve ever seen, and I can say that because I take no credit for that aspect of its production. I like to find the most talented person I know, and often, that isn’t me. So I say okay, who is the best for this, and can we get them? That’s what I like to do. Bring everyone in and let all their strengths shine and its one cohesive picture.”


Marie Gilbert: “If my readers want to see Zombie Hunters: City of the Dead, how would they find it?”


Patrick Devaney: “They can find it on Amazon Prime. They can download that or pick up DVD’s from Amazon. DVD copies might also still be for sale in stores like FYE, if you can still find them.


I want to add that for the people reading this: if they appreciate horror and Indie film the way we do, then they should go out to the festivals and go out to the conventions and talk to the people who make these films and support them.


A lot of times, you go to conventions and you’ll see the cast of “The Walking Dead” and you can spend 300 dollars to get a picture with them or, you can spend a fraction of that and pick up three or four Independent Films that you may get more from than a picture with a celebrity. The convention scene is drastically changing now where it’s focused on stardom and these photo ops, and what happens is the Independent producers come in and some of them are mortgaging their houses to make these films and selling them for ten dollars, but people just walk by them and say, ‘I can’t, I just spent one hundred and twenty-five dollars to meet Norman Reedus.’ (this is something that has actually been said to me, and more than once.) 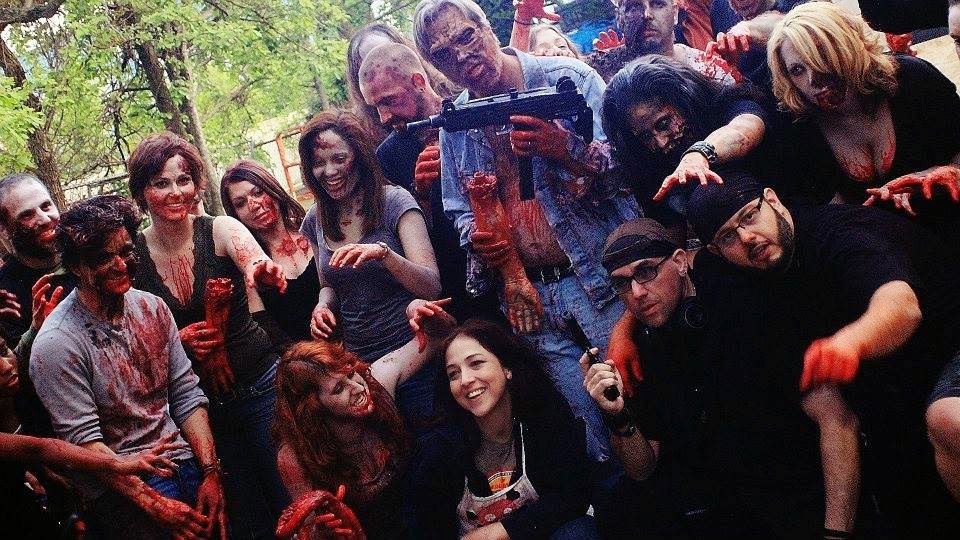 People have different interests, and there’s nothing wrong with autograph collecting. But if people truly love Independent work: sci-fi, drama, horror or whatever, then it needs to be supported. If it’s really good, then people have to be told, “You know this film was exceptionally good.” This will encourage them to do more things and that’s how you keep art going because if not, then it’s just Hollywood and just Transformers movies and that’s all you’ll ever see. That would be a real shame. There should be room for both.”


Marie Gilbert: “Thank you, Patrick for being my guest. It was a pleasure talking and you have to thank Joe Parascand.”


Patrick Devaney: “The pleasure was mine. Thank you very much. Joe is awesome and in an industry that’s built on selfishness, he is the most open guy and the most selfless person who will put everyone ahead of him and equally promote everyone and he really takes cross-promotion to a whole new level. I love the guy as a person. I’ve known him for years, but just being able to work with him...I’m going to be directing him on January 17th and January 31st in different scenes in for the last two episodes of Zombie Hunters.” 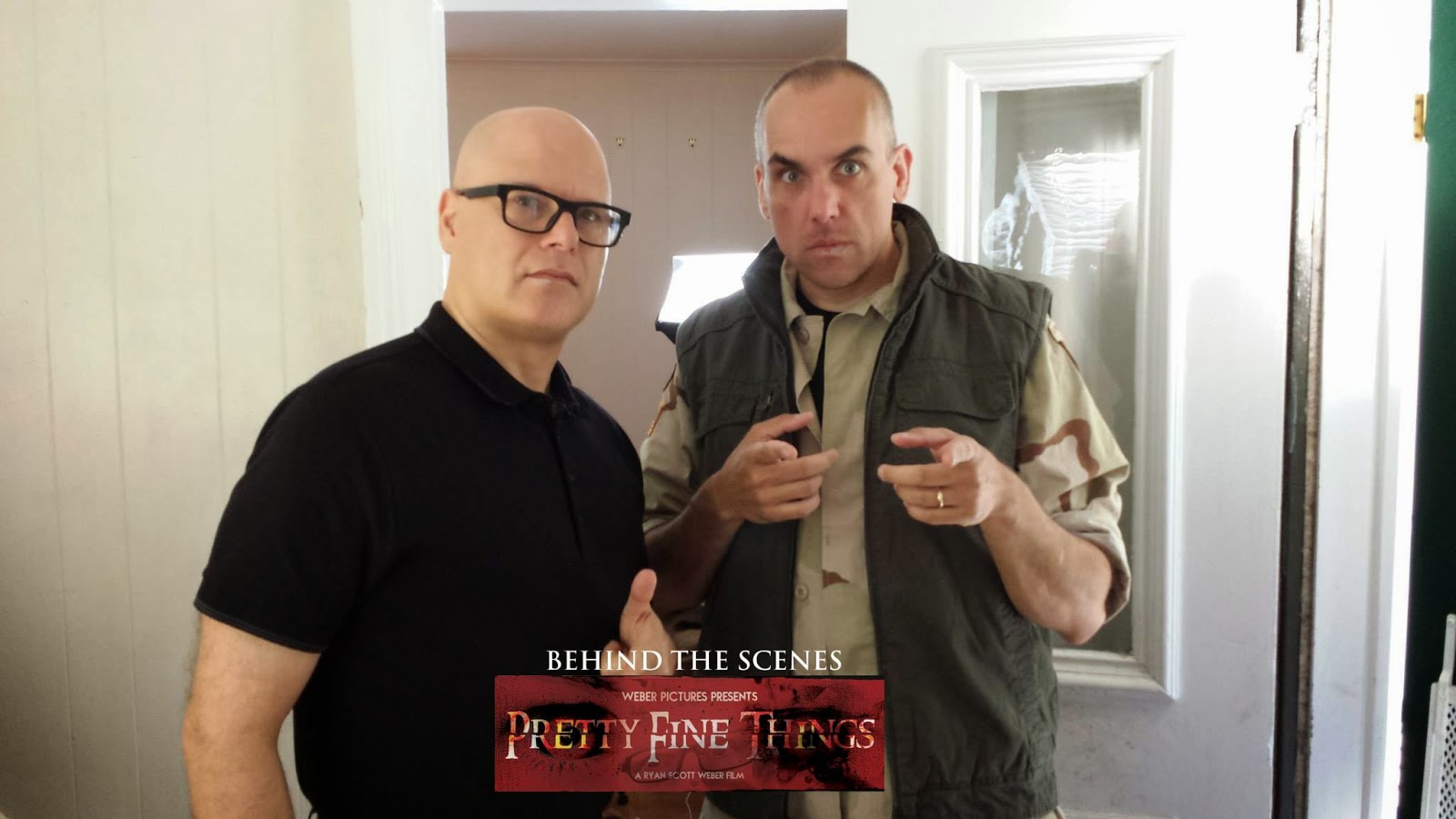 Marie Gilbert: “Tell Joe I said hello. You know Joe has referred a lot of people to me to interview and you are all nice, good people, who love and do top quality work. Thank you again, Patrick.
And to all my little zombie snacks out there, if you make it out to the New York Horror Show go looking for Patrick Devaney and tell him Steampunk Granny sent you
Posted by Marie Gilbert at 4:58 AM